The Remarkable Metamorphosis of Roger McGillicutty 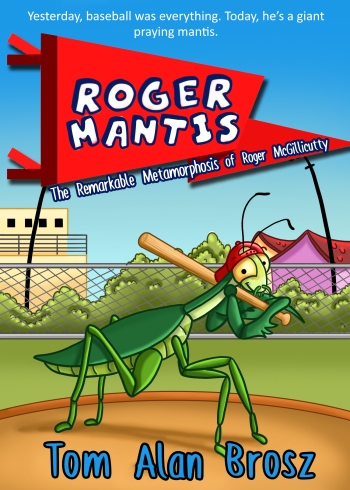 As young Roger McGillicutty awoke one morning from uneasy dreams, he found himself transformed in his bed into a gigantic insect.

Roger McGillicutty, 12, wakes up one Saturday morning and finds out he has unexpectedly transformed into a five-foot praying mantis.

His parents seem to be coping with it fairly well, and his dog Lou is okay with it, but how will the rest of the town of Highland Falls handle it? Roger has school on Monday, the carnival’s coming to town next week, and his Little League team is playing their biggest rival Centerville next Saturday. Being a giant bug will seriously cramp his style!

Or maybe not. Things begin to change when Roger performs a spectacular rescue of his classmates from a broken Ferris wheel.

Is Roger just a six-legged freak, or does he have what it takes to be a superhero?

Roger’s story takes off from the famous beginning lines of Kafka’s The Metamorphosis, and then flies in an entirely different direction. Behind the adventure and the humor is a story about accepting who you are—your talents and limitations—and learning how to make the most of it.